It's really amazing with regards to that load balancing. We'll teach you about that variance feature. Routing protocols better avoid loops and they all pretty much do these days. EIGRP and Open Shortest Path First, or OSPF, are far better than Routing Information Protocol, or RIP, still, by the way. And this is Classless. It can be changed to a classful routing protocol and we don't want to do that. And this is light on your network in terms of chattiness. It's not going to just endlessly chatter like a pure Distance-Vector Routing Protocol did. Anything Hybrid or Link–State is not chatty anymore. I hear they're saying bounded updates. What is bounding updates? Is that jumping? Bounded, what does that mean?

That means our updates are confined to a specific area or section of our autonomous system. Now we said the word "area". Does EIGRP support areas?

No, not specifically 'areas' like we saw when we discussed OSPF. So no, we don't have specific areas in the hierarchical fashion with EIGRP. So our topology is pretty much just flat here. There is no hierarchy. So how do we bound? We do it with technologies like summarization. And we don't broadcast with any sophisticated routing protocol. Only RIP v1 is broadcast based. Everything else is multicast based.

So if we're not using any type of broadcast, that means we'd be using multicast. What multicast address are we going to utilize to form neighbor adjacencies with EIGRP? See this is really interesting. If you recall from OSPF, OSPF uses 224.0.0.5. And it uses .6 when communicating with designated router. So that's OSPF, 5 and 6. 224.0.0. RIP is .9. EIGRP is .10 for all of its multicast functionality.

Let's recall what the term is to represent metric for OSPF. Well do you remember? Let me give you a different metric name. RIP uses hop count, OSPF uses cost. So what's EIGRP's name? It's called "feasible distance".

All right. So we have hop count, cost, and then for EIGRP, we have feasible distance. This is kind of an annoying name in all honesty. And we could call it the EIGRP composite metric because it's a composite of up to five different attributes. Now four really, but we often say five. So feasible distance is far more sophisticated calculation and so, it cannot really be simplified in the same way we say cost and hop count. We can't simplify it to that sort of highly reductive manner. So it's a term though that we have to understand and by the way, it's abbreviated. And the abbreviation is FD. FD – feasible distance.

Just like with RIP and just like with OSPF, we are looking for the lowest metric out of all the information we have. So whatever feasible distance is the lowest to go from this particular router to the destination network, that's the one that would be put inside of the routing table. How do we come up with the feasible distance though? How is it determined? Well we have to understand another term before we can fully understand how feasible distance is calculated and that is advertised distance. EIGRP learns from its directly connected neighbors, just like RIP. OSPF, if you recall, we flooded those LSAs. Since we flooded those Link-State Advertisements, or LSAs, we received information directly from the source. Not with the EIGRP, EIGRP learns from its directly connected neighbor. So it's a routing by rumor protocol. Just like RIP was. So the advertised distance is the distance that our neighbor is reporting to us, and it represents how far they are away from the destination network.

So when our neighboring router advertises networks to us, we see all of those networks that are advertised, and then we realize, hey, that's not our cost, that's not our metric, that's the adjacent router's metrics. So what's the delta between the overall metric and what is being advertised? Well the delta is the link between us. The link that separates us. So we factor that in, to get the feasible distance. We factor that in, we take the advertised distance, that's what's attached for all the routes that our neighbor gives us, and say, hey, how costly is it to get to our neighbor! Let's be mindful of that, and add that, factor that in, and that is what will go in our routing table by the way. So advertised distance, does that show up in our routing table? Not at all. Advertised distance, we will find in a different table - the topology table. In our routing table, we find the feasible distance, the total distance from us to that destination network.

So speaking of tables, EIGRP relies on three tables. And these tables are really, really important. These are the fundamentals of EIGRP. And we'll see relationship between all these tables here. 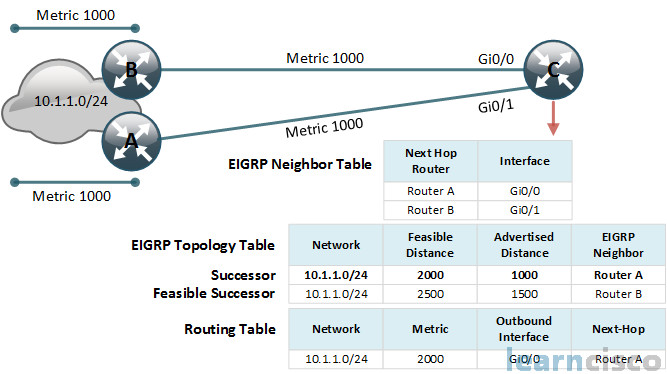 Let's start off first of all with the neighbor table. And our focus is going to be on router C here. You'll notice that router C has two neighbors. What are those two neighbors? Router A and router B. And it tells us what interface we can utilize to reach those 2 different routers. It's a pretty simple table. But it's important to realize that without neighbors, we are unable to learn routes. So we have to have the neighbors before we can populate any other table for EIGRP.

And that's critical when we're troubleshooting. So we're going to show you the command that views these three discreet tables. But you're not going to worry about routing updates not showing up at a routing table if you don't have neighbors. Make sure you have neighbors first, then usually, all things work out pretty well for you. Now the middle table is the most important of all for our deep understanding of the Diffusing Update Algorithm, or DUAL, algorithm, which is the heart and soul of EIGRP.

So let's look here at the headings of our topology table. Let's see what we have, we have network, feasible distance, we already discussed what feasible distance is. It's the total distance from this router to the destination network. Advertised distance with that neighbor is advertising to us, as the distance from themselves to that destination network. And then, we can also see who that specific neighbor is who described to us or advertised to us that particular network. Now notice here, both A and B have told us about 10.1.1.0/24. Is that okay? Is that possible?

Absolutely. And let's understand that administrative distance doesn't come into play here. Why is that? Because they're both going to have an administrative distance of 90 because they're both EIGRP routes. So in fact, they could both show up in the routing table if you wanted to load balance. So we don't have to necessarily choose a source here. We've already chosen the source, it's EIGRP. Now we have to figure out which one has a better metric. And we want to find that one. So I see two entries and I want you folks thinking, which path is better? Which has the best metric?

No, we don't have to look at the advertised distance specifically to determine which is the best. Because the feasible distance, that's the total distance from our router to the destination network. So we look for the lowest feasible distance and we find that, that is the best path. But wait a second here. Do we call it the best path when it comes to EIGRP? No. Just like we have this wonderful term of feasible distance, we have another wonderful term we really have to understand here for EIGRP as well, and it is successor. Successor means the best path. So if I asked you, which of these two paths - the path to router A or the router B is going to be the successor? How would you answer that? Well you'd have to remember that successor is the best way, which is not a name that I would have given it, right? It's a kind of an unusual name. And in hierarchies usually, successor is the next in line. So that isn't how it's being used here. Successor is the best. EIGRP also installs a backup pathway or it is ready and capable of immediately installing a backup path. What do we call that?

The conditions have to be right. If we are going to pre-qualify something, we have to make sure that it is not a loop. The DUAL algorithm really is about loop prevention. And we're just going to do a fly by about this calculation because we're not really supposed to be talking about it here. But let's give you some insight. The advertised distance helps us do that qualification. We compare for the candidate feasible successor, the 1500 that you see here. See that 1500? That's the value we're going to look. And we're going to compare that against the 2000 that you see for the feasible distance of the successor route. And what has to happen is the advertised distance has to be less than the feasible distance against the successor. So the whole equation is, the candidate feasible successor must have a lower advertised distance than the present successor route in order to be working and qualified as that feasible successor. You don't have to know that. That's the equation though. However, you do need to understand the basics, right?

We want you to understand successor versus feasible successor. That is important here. DUAL algorithm is important. Your knowledge of at least the high level aspects of that is worthy of CCNA study, okay? So we're not trying to go overboard for the sake of that. We're not going to do that. So looks like we did that topology table to death. But I want you to understand that there could be a lot of other ways of getting to that network. They might not be successors, they might not be feasible successors. You could just have maybe ten other routes. So we'll, in the topology table, have the best route and maybe a pre-qualified feasible successor or maybe some other pathways that we hopefully don't have to use unless we have a rainy day, and our primary and our secondary links have gone down. Now some of you might be looking at these numbers - 2000, 2500, those seem kind of high. In RIP, I never saw anything higher than 15 because if I saw 16, it was unreachable. With OSPF, all right, I saw some high numbers once in a while, but you know, not really as high as EIGRP as I've seen. Because sometimes, we'll see values for EIGRP in the millions. And that's, you know, I say sometimes, but typically, that is what we see, in the millions. Is that a cause for concern?